The QGIS Python console is great for doing one-off tasks or experimenting with the API. Sometimes you might want to automate a task using a script, and do it without writing a full blown plugin. Currently QGIS does not have a way to load an arbitrary Python script and run it.[1] Until it does, this post illustrates a way you can create a script and run it from the console.

There are a couple of requirements to run a script in the console:

Setting up the Environment

By default, the Python path includes the .qgis/python directory. The location depends on your platform:

To see what is in your PYTHONPATH you can do the following in QGIS Python console:

While you could use the .qgis\python directory for your custom scripts, a better way is to create a directory specifically for that purpose and add that directory to the PYTHONPATH environment variable. On Windows you can do this using the Environment Variables page in your system properties: 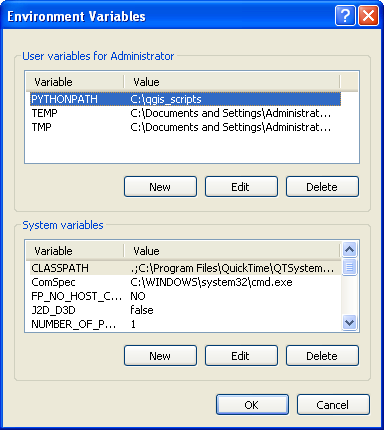 On Linux or OS X, you can add it to your .bash_profile, .profile, or other login script in your home directory:

With the environment set, we can create scripts to automate QGIS tasks and run them from the console. For this example, we will use a simple script to load all shapefiles in a specified directory. There are a couple of ways to do this:

We will use the latter approach because it is more flexible and allows us to initialize once and then call methods without having to pass the iface object each time.

To open the console use the Plugins->Python Console menu item.

The comment at the head of the script explains how to use it.

First we import the Loader class from the script file (named loader.py). This script resides in the qgis_scripts directory that is our PYTHONPATH.

We then create an instance of Loader, passing it the reference to the iface object:

This creates the Loader object and calls the init method to initialize things.

The load_shapefiles method uses the path to get a list of all the shapefiles and then adds them to QGIS using addVectorLayer.

Here is the result, rendered in the random colors and order that the shapefiles were loaded:

[1]. I have plans on the drawing board to implement this feature.